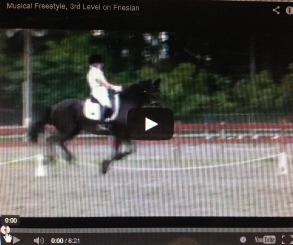 In 2005, I decided to find a Friesian.  I had been contemplating this since I watched the beautiful Friesians perform at Equine Affaire.  Who wouldn’t want such majestic and magical horse?  In July of 2005, I was surfing the internet, viewing the various “Friesian for sale” sites and found the website of Black Sterling Friesians, based out of California.  Janna Goldman had several Friesians for sale, young ones and older ones.  I was on the search for a young one, but when I saw the ad for a 13 year old mare…. I had to learn more about this lovely horse.

“Beike fan ‘t Zand” was advertised to be successful at ZZ level of dressage in the Netherlands.  Her photos and videos were all very nice, and the price, although higher than for any horse I had ever purchased, was in reach.  So, the deal was made, and at the end of August, 2005, Beike arrived in the United States, via KLM airlines.  I met her for the first time at the USDA import quarantine facility at Rock Tavern, NY, at where Dad and I picked her up to take her to Cornell’s CEM quarantine facility.  I had my first ride on Beike at the Cornell’s CEM facility.

When Beike was sold, the sale included a breeding to the KFPS approved stallion Fabe 348.  So, when Beike came to the United States, she was “in foal”.

“Timothy fan Gale’s” was born on June 19, 2006.  We then rebred Beike to the magnificent KFPS approved stallion, Goffert 369.  The breeding was successful, and “Whisper fan Gale’s” was born on June 18, 2007.  Both youngsters are maturing into very nice riding horses.  Tim is so very smart and easily trained.  The KFPS awarded Tim with his “Star” rating in 2010.  Whisper is very laid back and is a very good lesson horse.  I currently use her for intermediate/advanced riders.

After Beike was relieved of being a “broodmare”, I got serious about advancing Beike’s dressage training, building on what Miek had already taught her.  I had set a goal for myself to earn the USDF Silver Medal, which required certain scores in Fourth level dressage and Prix St. George (PSG).  So, we actually entered our first USEF/USDF dressage show at Fourth level!  And was able to earn the first half of the necessary scores.

One of the treasures that came along with the purchase of Beike, was getting to know Beike’s original owners, Miek and Jan Reitsma who live in the town of ‘t Zand in the Netherlands.  We have traveled to each other’s homes and have made some fun trips together to dressage shows, and of course, the big Friesian Stallion Show, that happens every January in the Netherlands.

The next step was to train Beike to be able to do the required maneuvers for Prix St. George.  Once again, Miek traveled to the United States to help me with…well…everything… to make it possible for us to travel to Dressage at Saratoga in May of 2013, at where we got our first “above 60” score in PSG.  We took the lessons learned by the Saratoga judges’ comments, and practiced and practiced and practiced for the next two weeks until we showed at the dressage show at Houghton College in early June.  We were successful to get the second needed “above 60” score, completing the requirements for the USDF Silver Medal.  l was awarded the Silver Medal at the USDF Annual Convention, in Lexington, KY in December of 2013.

I was not the only one that caught the “Friesian bug”.  My friend, Pam Schneider was so impressed with Beike, that when the opportunity came up to buy Beike’s half sister, Karolien, Pam became a Friesian owner as well.  Karolien arrived in January of 2006 into the United States.  Pam and I enjoyed riding the sisters together, and most memorable is our Pas De Deux performance (video is below), done during the “Dances With Horses” horse show, which happened to be held at our stable in September of 2007.

Pam purchased her second Friesian, “Amos” in March of 2008.  He truly had the “fairy tale” Friesian “look” and personality.  Pam schooled and showed her two Friesians at the local dressage shows through the next couple of years, but sadly, in the fall of 2010, we lost Karolien to a strange malfunction of her stomach. It just stopped working.  Even with the best efforts of Cornell University and all that we could do for her, she left us on a sad afternoon, with Beike by her side.  I was very worried about Beike for awhile as she was depressed not to have her sister and friend.

As we know, when one door closes, another door will open, and it did for Pam.  Not long after Karolien’s passing, Pam found “Wiebren”, another wonderful Friesian gelding.  After a successful test ride, Wiebren was purchased by Pam and moved to our stable in December of 2010.

During the summer of 2011, Pam bought a Hanoverian warmblood from Germany.  “Rugby” arrived in the United States in September of 2011, and Pam sold Amos to me to use for lessons, and he was a barn favorite for lessons, as he was beautiful and well behaved, giving his students a good feeling about the basics of dressage.

Sadly, we lost Amos to colic in February of 2016.  Very sad.  His colic was caused by the failure of his intestinal system to function.  This seems to be a problem with some Friesians, such as they age into their mid-teens, some part of their digestive system just stops.

Friesians, because of the closed book and small gene pool, as a breed, are exhibiting some defects.  You can read a bit about it here:  https://ker.com/equinews/health-problems-friesian-horses/   Our bad luck with the digestive issues is apparently a “Friesian” thing.

Performed in 2007 with Beike and Karolien to Beatles Music.

Beike and Gale perform a third level freestyle at the 2009 Chemung County Fair, with “Madonna Music”. 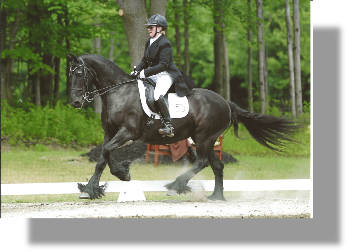 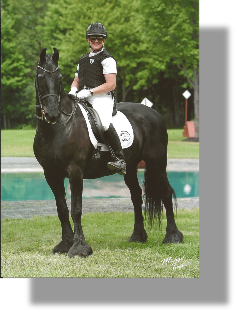 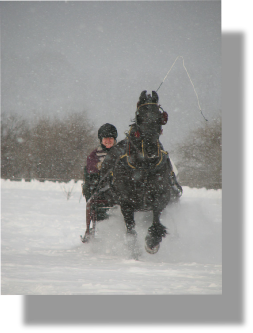 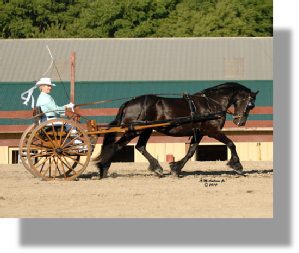 Beike was truly a very special horse.  My heart is broken still….. We lost Beike on June 1st, in 2017.  She was 25 years old and still so active, but her old insides gave way to colic, and we made the difficult decision to send her over Rainbow Bridge.  She is with me every day, and not a day goes by that I don’t miss her so very much.  I wear a bracelet and necklace made of her tail hair, and her cremains lie under a modest shrine at the foot of my bed. 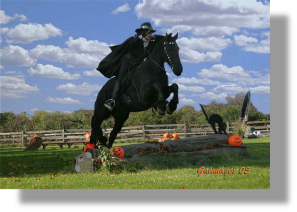 As of September of 2018, we still have two active full papered Friesians and two half-Friesians at Gale’s.  Beike’s offspring, Whisper and Tim continue their dressage training.  Whisper is in Gale’s lesson program.  Here is a YouTube link to a wonderful ride on Whisper, ridden by Miss Madison Zahradka, a few years ago: Whisper & Madison’s Ride.

Then, this summer at the 2018 Chemung County Fair, MS. Paige Harvey agreed, at the last minute, four days before the dressage show, to try Whisper out, and ended up entering her in the USEF TL #1 and #2 Tests, winning both classes and taking the Training Level Championship. A video of her ride is here:  Whisper & Paige’s Ride.

To the left is Makayla Doan riding our half-friesian, “Smokey’s Midnight Surprise”.  His dam is our cremello quarterhorse mare, Lil.  Smokey loves to jump, and does well in dressage as well.  Smokey is in the lesson program at our stable. 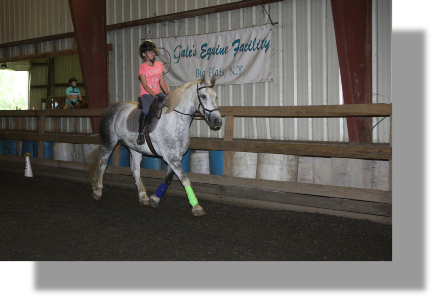 Also in our lesson program is our other ½ Friesian (other half is spotted draft) and his barn name is “Harley”.  He’s a big guy but is very sweet, and is used in the lesson program for young and old. 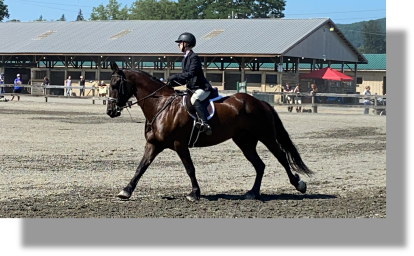 Whisper was bred to the stallion Hessel 480 in June of 2021, so we are expecting a new foal to be born in mid May, 2022.  Hessel is a tall Friesian, well skilled in dressage and has a very sweet disposition.  Here is his advertisement page…… 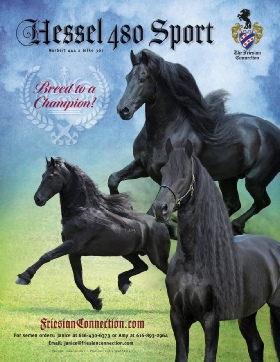